We are excited to announce the next in our video series, Stereo Sessions, from The Toy Box Studio. Here Angel Snow performs “Photographs” with a fantastic band.  Angel and Robby Hecht stopped in for a night of music to a full house audience. It was an otherwise quiet Monday evening for the rest of East Nashville. But at The Toy Box Studio it was standing room only and hardly a place to put your wine glass down as Robby and Angel played a shared set of original music with a handful of covers thrown in (under the band name Martha And The Martians). Backing them up was a very talented band made up of some of the best of East Nashville: Robby Hecht on acoustic guitar and vocals, Angel Snow on acoustic guitar and vocals, Adam Gardner on bass, Jonathan Trebing on acoustic guitar, Jordan Hamlin electric guitar , and Katie Gifford on background vocals.

We invite artists to perform in front of a small studio audience creating a relaxed atmosphere away from the stage. At The Toy Box Studio the artist can express themselves in an intimate setting. The songs are mixed live through the famous MCI console (the same one that recorded Hotel California and Saturday Night fever) in real time and printed to analog tape in “live to two track” fashion. Lij Shaw has spent years learning this technique backstage at the Bonnaroo festival with The Toy Box Hay Studio.

At Bonnaroo The Toy Box Hay Studio has recorded hundreds of bands for national radio broadcast all from within a small recording studio built of hay. Stereo Sessions brings this unique recording style back to The Toy Box Studio in East Nashville. Our intent is to share with you a real performance that keeps the little mistakes that define a performance’s character, as well as the inspired moments that make it great. Honest musical communication between human beings makes for beautiful recordings. We add video to the process to let you feel like you are there at the session. We plan to bring you many more of your favorite artists. Stay tuned to Stereo Sessions and thank you for watching and listening! 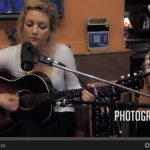